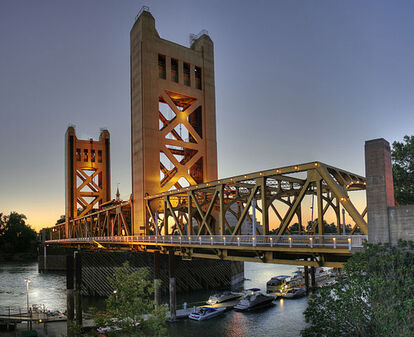 The Tower Bridge is one of the most iconic landmarks in the Sacramento Metro Area. Connecting Downtown Sacramento to the City of West Sacramento, construction on the bridge that crosses the Sacramento River commenced in 1934 and was formally dedicated in 1935. When fully lit up in the evening, the Tower Bridge provides a striking image that may be the most photographed scene in the entire area.

Given the proximity to the downtown area, the steel construction bridge was built with more than just strength and function in mind. After completion, the Tower Bridge received a design award from the American Institute of Steel Construction

For 30 years the Tower Bridge handled both vehicle traffic and rail traffic. However, as Sacramento grew it became necessary to relocate the rail line and design space on the bridge for foot traffic. In 1963, the Sacramento Northern Railway abandoned the railway rights to the bridge. Today, many visitors to Sacramento make the walk across the bridge part of their visit.

The bridge is located adjacent to Old Sacramento and provides access to Raley Field, home of the the Sacramento Rivercats. The Rivercats are a minor league baseball organization affiliated with the San Francisco Giants.

As both Sacramento and West Sacramento grow, the bridge has changed and evolved. The color scheme, which from the beginning has been topic of much discussion among locals, was changed to its' current gold. There is even talk of adding trolley service across the bridge at some point.