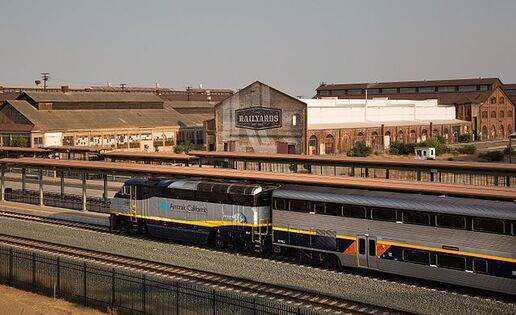 It will take 15 to 20 years to build out, but when it’s complete the Sacramento Rail Yard development will transform the northern section of Downtown Sacramento into a bustling mixed use neighborhood, with several parks and generous amounts of open space. The plan calls for over 10,000 housing units and nearly 2 million square feet of retail and commercial space.

The three big centerpieces of the development are 1) a Kaiser Permanente medical campus on 17 acres with 1.3 million square feet of hospital and medical buildings, 2) a 540,000 square foot courthouse and 3) a state of the art, 25,000 seat soccer stadium to house Sacramento Republic, Sacramento’s recently awarded entry in Major League Soccer. The Sacramento Republic are set to begin play in the new stadium when the MLS season opens in 2022.

A major consideration for the planners of the Rail Yard project was to incorporate as many of the historical Rail Yard structures as possible into the master plan.  The Central Shops building which was used for railroad maintenance and the Southern Pacific Depot building are to be preserved, with some of the space set aside for a public marketplace.

Upon completion, the Rail Yard development will nearly double the size of the Downtown Sacramento District, and offer the opportunity for thousands to live and work in the downtown area. With a goal of creating a high energy environment that meets the needs of large employers looking for access to a large pool of highly qualified workers, the plan looks to push Sacramento’s downtown into the conversation of best downtown districts anywhere in the west.

Now that most of the environmental remediation work that had been a big obstacle to past development efforts is well underway, and a strong financial foundation is in place, it’s just a matter of pushing the project forward and watching the vision come into focus.