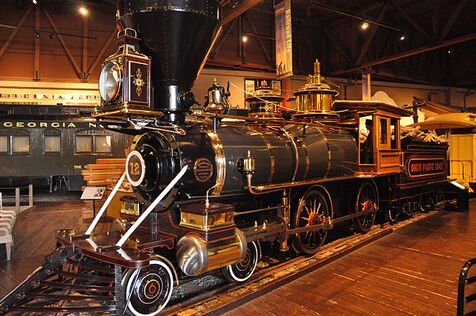 Located at the north end of Old Sacramento, the California State Railroad Museum is part of the California state park system. Initially the museum opened in 1976 with only the Central Pacific Railroad Passenger Station available for viewing. Then in 1981 construction was completed on the Railroad History museum. Additional buildings have been added over the years and in 2017, the museum became a Smithsonian affiliate.

The museum was the end result of a labor of love by several railroad enthusiasts that dates back to the 1930’s. The group, from the San Francisco Bay Area formed the Pacific Coast Chapter of an organization dedicated to sharing the wonderful history of the railroads and their contributions to the development the United States. The group was the Railway & Locomotive Historical Society.

The museum features over 20 fully restored locomotives and railroad cars. The locomotives provide perspective on just how big and powerful train engines were, even back in the mid 1800’s. It took a lot of power to get those trains through the Sierra passes. The railroad cars, from the standard cars to the custom coaches help visitors to understand what train travel was like 100 years ago.