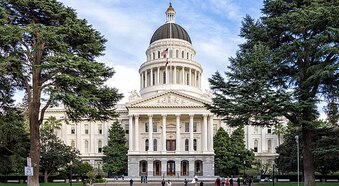 Located at the confluence of the American and Sacramento Rivers, in the heart of California's central valley, the City of Sacramento has served as the state capitol since 1854. The history of Sacramento goes back a bit further, to the very early 1800's when Spanish explorer Gabriel Moraga gave the area and the river the name "Sacramento."

In 1848, just to the north at Sutter's Mill in Coloma, the discovery of gold transformed the Sacramento into a bustling center of commerce. Sacramento became the first incorporated city in the state in 1850, and though the designation of "state capitol" bounced around some in the early 1850's, once Sacramento became the permanent capitol construction on the capitol building commenced shortly thereafter in 1860. Construction of the California State Capitol was completed in 1874.

Throughout the late 1800's Sacramento played a big role in the growth of California as a major player in the expansion of commercial activity on the west coast. Sacramento was one of the first end points to the first Transcontinental Railroad, and controlled much of the commerce in the central part of the state through river traffic and the rapidly expanding Sacramento Rail Yard.

Through the years, Sacramento has remained an important part of the California growth story, politically, commercially and agriculturally. From a modest 10,000 in population in 1850, the Sacramento metropolitan area has grown to a population of over 2 million. Today, it's not just the rivers and railroads that move commerce through Sacramento. Sacramento's role as a major distribution hub for the western United States is tied to the north-south traffic on Interstate 5 and the east-west traffic on Interstate 80, that moves through the area. The many tourist attractions in Sacramento, including the Tower Bridge and Old Sacramento bring millions of visitors to the area, as well.

The Sacramento Metropolitan Area includes parts of Placer, El Dorado and Yolo counties and continues to be one of the fastest growing metro areas in the state.

We serve Sacramento, and we want to share some of the great things Sacramento has to offer to the people who live in the area and to those who choose to visit.